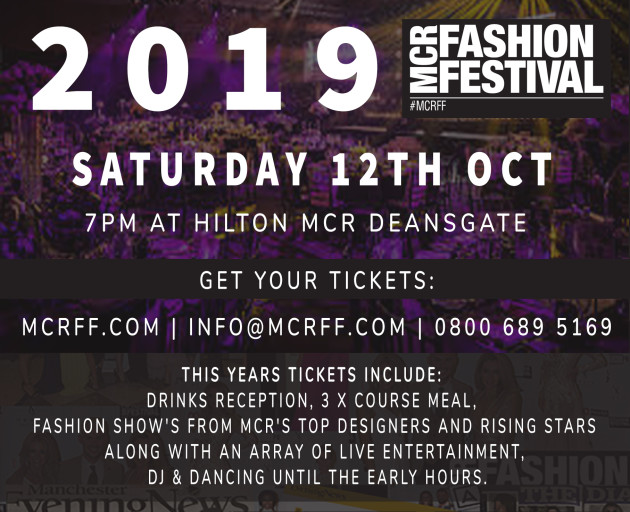 MCR Fashion Festival is a celebration of Manchester’s fantastic fashion credentials, with an array of catwalk shows from the city’s global designers and rising stars. Join us for a fabulous Gala evening event, inspired by the MET Gala, with fashion, food, drink, and a fun-filled line up of live entertainment.

Growing up within a creative Indian family, and being surrounded by vibrant colours and fabrics meant fashion has always been a significant part of my life. This fulled my curiosity and became a natural progression into studying Fashion and Textiles at Runshaw College in Preston.

With the fusion of my two loves, Fashion and The Performing Arts, I later completed a degree in Costume Design at The University of Leeds, Bretton Hall, surrounded by the beautiful Yorkshire Sculpture Park. After graduating I went on to working in Theatre, Television and Film in the Costume department. I later made the transition from working behind the camera to working in front of the camera and in 2010, alongside acting started up a Vintage Jewellery company selling up-cycled, one-of-a-kind pieces along with vintage bags and accessories.

Zeynep launched the Zeynep Kartal brand beginning of 2013, following more than twenty years of experience in the fashion industry in a variety of areas including textile, design, production and marketing.

Zeynep Kartal has now made a splash in the celebrity-filled red carpets of the UK, and wowing the catwalks of London’s Fashion Week with her elegant silhouettes and modern lines sought after by a growing number of American & British celebrities including Whitney Port, Coleen Rooney, Pixie Lott, Amanda Holden, Marina and The Diamonds, Michelle Keegan, Cheryl Cole and Lady Gaga.