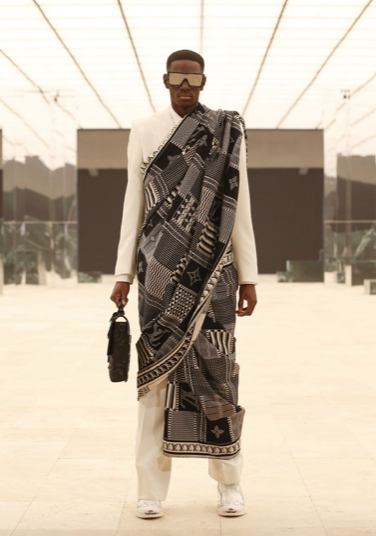 Virgil Abloh’s presentation of the Autumn Winter 2021 Menswear collection was an iconic film production; exploring relevant themes such as racial identity and cultural appropriation. The showcase featured a number of captivating components inclusive of spoken word, choreography, ice skating and a rap performance by Yasiin Bey. On Thursday 21st January, Abloh depicted his Autumn Winter collection, titled “Peculiar Contrast, Perfect Light,” drawing upon themes from James Baldwin’s “Stranger in the Village,” 1953 essay. The fashion show explores ‘the unconscious biases instilled in our collective psyche by the archaic norms of society…. within my practice, I strive to document and preserve the black canon and enlighten my global audiences.’ The designer wrote.

The production was originally intended to be presented to an audience, however due to coronavirus restrictions this was could not be implemented. Instead, the show was released to YouTube. I quite enjoyed the fact that there was no audience, I think that the motifs and messages conveyed throughout the presentation could be focused on more than, who was sitting in the front row.

The collection features a combination of different aesthetics, challenging archetypes associated with specific clothing and the people that wear them within society. Sparking a conversation that redirects the focus on perceiving fashion for its unique beauty, as opposed to some of the values associated to it; such as cultural background, gender, or sexuality. Abloh wants to break away from the preconceived notions individuals have about people based on the clothes they wear. Sartorial styles were common throughout the showcase, utilising unconventional textures and patterns to add uniqueness and artistic flair. Traditional accessories were given an update with the introduction of a new monogram print logo accompanied by updated materials and even spray paint effects. Virgil Abloh also incorporates influences from his Ghanaian heritage, reimagining Ghanaian Kente cloth as Scottish tartan print. This was such a bold move for the artistic director but an important one, to instil values of diversity within the luxury fashion sector by intertwining African and Western culture. “Being one of the few designers of colour that shows on the Parisian schedule, in a way, I’m a figurehead for a movement for diversity,” Abloh said. “I frankly don’t want those things to just be a moment.” The collection is an artistic masterpiece and it is definitely a showcase to take note of, taking the Louis Vuitton brand in a new direction.