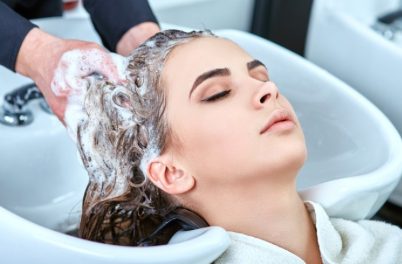 Getting your hair washed at a hair salon or barbers can seem like such a normal experience, although there are some risks that can pose a dangerous threat to your health during the process. Beauty Parlour Syndrome, known medically as vertebrobasilar insufficiency is a term used to describe a stroke or transient ischemic attack caused by washing your hair at a hairdressing salon. Although uncommon, beauty parlour syndrome can be fatal resulting in severe neurological damage.

The emergence of the term came about in 1993, by Doctor Weintraub, in a published survey that identified 5 women being hospitalised after having their hair washed at hair salons. 4 out of the 5 women also suffered significant brain damage as a result of the strokes. So how can doing something so simple as washing your hair lead to a stroke, which could change life as you know it forever? The process of straining your neck over a sink for long periods of time can have detrimental effects on the blood flow to areas of the body in particularly the brain, which can result in a stroke. ‘Experts believe that the process of pushing the neck backwards over a raised surface and holding it there for a prolonged period can stretch the arteries in the neck responsible for supplying blood, oxygen and nutrients to vital parts of the brain. On rare occasions this overextension can cut or tear the arteries which may lead to blood clots and strokes.’

In 2011, Dave Tyler began suffering from severe headaches after visiting a Headmasters salon in Brighton. Doctors identified that the headaches were being caused by a blood clot which later transpired into a stroke. Tyler was awarded a compensation sum of £90,000 back in 2016, as a result of his injuries. There is not much public awareness surrounding the issue of Beauty Parlour Syndrome due to its uncommon nature however, the life-threatening dangers of the illness are a cause for concern and should be widely acknowledged Mark Phillips from the Hair and Beauty Industry Authority has said ‘hairdressers have strict guidelines to ensure that their clients are as comfortable as possible and that their necks are not extended for long periods. He also commented that trainee hairdressers should be aware of the risks and carefully supervised.’ Some preventative measures for Beauty Parlour Syndrome include, propping up the neck with a rolled-up towel to prevent overextension of the neck, by ensuring the wash basin and chair are adjusted correctly for your height and letting the hairdresser know if you feel uncomfortable at any given moment.