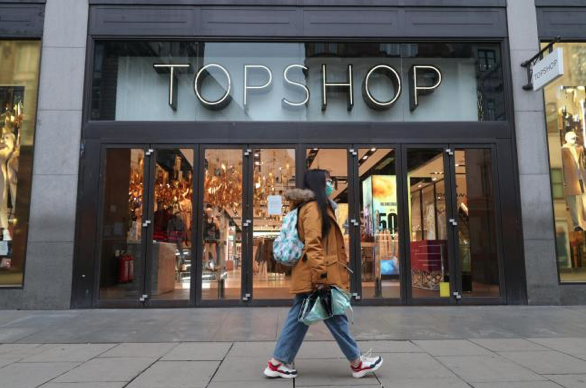 The Fashion Retail sector has taken a massive hit as a result of the Coronavirus pandemic, with big retailers such as Topshop and Debenhams being no exception. Topshop used to dominate the high street; holding significant influence within the fashion sector during the early 00’s. Gone are the days of Topshop’s highly sought-after London Fashion Week presentations, which saw household names Cara Delevingne, Jourdan Dunn, Alexa Chung and even Anna Wintour, flock to the Frow of the glamorous fashion shows. Topshop garments would be featured heavily in publications from the likes of Vogue and Elle, the high street brand also acquired collaborations with fashion icons and celebrities inclusive of Kate Moss, Beyonce and Kendall and Kylie Jenner. Topshop at its peak, was the epitome of glamour and style, making catwalk trends accessible and affordable for the mass market fashion lovers, (myself included). As a result of the emergence and popularity of numerous e-commerce fast fashion brands, such as Pretty Little Thing, Boohoo and Missguided; Topshop’s price conscious consumer could often find similar items at a cheaper price from many of these emerging competitors. Topshop, once a celebrity favourite began receiving a substantial decline in turnover dating back to 2017.

Coronavirus has taken its toll on the global economy and businesses have suffered a significant loss. In November 2020, Topshop announced it had gone into administration leaving 13,000 jobs in uncertainty and at the risk of redundancy. What did this mean for the brand? Would Topshop be closing its doors forever? More information regarding the situation was provided from the announcement that, Topshop’s iconic Oxford Street flagship store would be put up for sale. The store, which boasted a DJ booth, nail bar and numerous food stalls, closed its doors for the final time on 19th December 2020; marking the end of an era for many. The Landmark Oxford street store used to be the first destination I would to go to as soon as a sale was announced; walking around the shop, being weighed down by 5kg of clothes without realising you had in fact been in the 3-storey store for 4 hours. Clarity on the future of Topshop is still very unclear. Will the store move their brand to become a sole e-commerce platform or is this the end of Topshop completely?